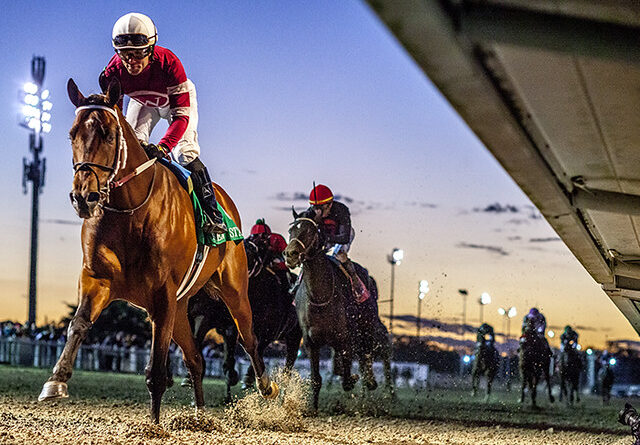 The 2022 Kentucky Derby is out of the way, and all the attention now turns to Pimlico for the second jewel in the Triple Crown, as the Preakness Stakes is run on May 21. This year’s Kentucky Derby was one of the most historic in the prestigious race’s history, as long-shot Rich Strike defied expectations to win the famous race at odds of 81/1.

However, should the attention be on the runner-up from the race at Churchill Downs when it comes to the Preakness Stakes this year? The Preakness Stakes odds would certainly suggest that it should be, as Epicenter is the clear favorite in the betting for the race at Pimlico in 2022, but should bettors be with or against the three-year-old trained by Steven Asmussen?

There is no denying that Epicenter’s stock remains extremely high following his runner-up finish in the Kentucky Derby this year. The horse trained by Steven Asmussen was sent off as the favorite in the betting for the race at Churchill Downs, and ran a stunning race for three-quarters of the trip.

Going into the final couple of furlongs, it seemed as though the trainer’s poor record in the race would finally be coming to an end, but then came the late charge of Rich Strike.

However, many would still argue that Epicenter remains the cream of the crop in this three-year-old division this year, as we saw a different dimension to his abilities at Churchill Downs. It was only a second career defeat for the three-year-old, and he is yet to finish outside of the top two in five career starts.

Nevertheless, he remains hugely talented, and evidence of that can be further found from his wins over Smile Happy and Zandon in the G2 Risen Star and G2 Louisiana Derby, respectively. He will be a deserving favorite for the Preakness Stakes this year, but bettors should be very wary when it comes to the trends.

Trends Not In His Favor

Meanwhile, eleven of these were set off as the favorite in the race at Pimlico. The only Kentucky Derby runner-up that was a favorite for the Preakness that won the race was Prairie Bayou in 1993.

That could be a potentially damaging trend towards the chances of the Asmussen charge at Pimlico this weekend, but it is worth mentioning that trends haven’t always helped find the winner throughout this year.

Evidence of that can be found in the Kentucky Derby, as Rich Strike won the Triple Crown race despite having failed to win a graded or stakes race, and also made his debut on the turf. But, it does raise potential questions as to whether Epicenter will win the Preakness, and will put doubts in the minds of bettors for the race this year.

Who Could Be The Main Competition?

This year’s race could be one of the most competitive Preakness Stakes that we have seen in many years, as there is no shortage of intriguing contenders.

Kentucky Derby runners didn’t fare very well at Pimlico last year, but Simplification for Antonio Sano does hold interesting claims this year after running a very strong race when fourth at Churchill Downs. Zandon could also be another re-appearing rival. The three-year-old for Chad Brown finished third in the Kentucky Derby.

Early Voting is one of the contenders in the Preakness that will come into the race fresh after connections made the brave decision to bypass the Kentucky Derby after losing by a neck from Mo Donegal in the G2 Wood Memorial. He could go very well in the Preakness, and his price in the betting would suggest that.

However, the most intriguing rival may come in the form of Secret Oath for D. Wayne Lukas, who is targeting a record-equalling seventh win in the race.

Secret Oath was exceptional in the G1 Kentucky Oaks, as he won by two lengths from Nest, and she holds every chance of becoming the seventh filly to win the race, and follow in the footsteps of Swiss Skydiver, who won the Pimlico showpiece in 2020.